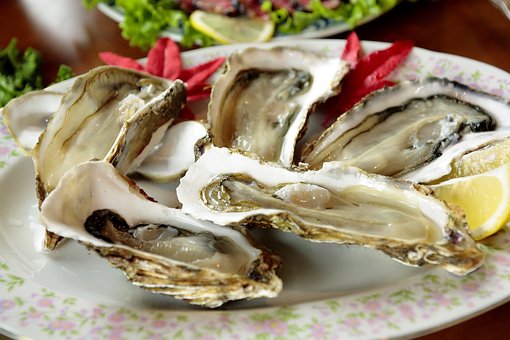 The oyster, a far priced mollusk appears on menus all over the world. It’s unique texture and flavor is unlike any other kind of fish in the world. Different species are cultivated extensively throughout the world. The best oysters in Europe include the green Marenne in France, the Belon, and the English Whit sable. Most oysters are offered in their raw form, although some are frozen, tinned or bottled in fresh water.
There are two common types of oysters people are interested in purchasing: they are simply known as either cupped or flat. The taste and texture of each one differ widely from specie to specie, and they acquire their individual taste from their surroundings.
The best way to preserve them is to set them on a bed of ice or in a perforated box with damped clothe wrapped around them. Make certain that the oysters will not suffocate in the melted ice or submerge under water in a case or cooler-remember that oysters are living creatures that will deplete the quantity of oxygen within a small volume of water very quickly.
For the last 700 years edible oysters have been a part of the human diet but might have been eaten in a raw or cooked form for a longer time. The meat inside the oyster is the edible part; after the shell was cracked open, the meat can be cooked in various ways.
Oysters contain a great deal of vitamins, minerals and organic compounds. Other elements of nutritional value include Selenium, iron, manganese, copper, vitamin B12, vitamin D and high levels of protein. They’re also a huge source of water, omega-3 fatty acid, cholesterol and antioxidants. They also contain sodium, potassium, phosphorous, riboflavin, niacin, and vitamin C.
These elements make oysters a very healthy food that can greatly increase the health and overall functions of the body.
Eating oysters can help in boosting the immune system. The vitamin C and E content, together with other minerals, contain anti inflammatory and anti-oxidant properties that protect the body against free radicals created by cellular metabolism. These toxins can mutate the DNA of healthy cells into cancerous cells. Wherever they are lodged, they can also cause premature aging, heart disease and general body disrepair. These free radicals may be obliterated by anti-oxidants and vitamins found in oysters.
Oysters can also can help in increase libido in men. It contains incredible zinc content and over 1,500% of daily dosage in one serving. Zinc deficiency has been closely linked with erectile dysfunction and impotency. Oysters can give back sexual energy to men and increase their feeling of masculinity.
Oysters also have a huge store of iron, it contains more than 90% of what the body needs daily. Iron is a major component in the creation of red blood cells in the human body and aid in preventing anemia that’s a deficiency of iron, which results in stomach disorders, cognitive malfunction, fatigue and general weakness of muscles.
Again, once the circulatory system is provided with fresh and healthy blood cells, organs will have a high degree of oxygenated blood to support their actions, this makes them work effectively.